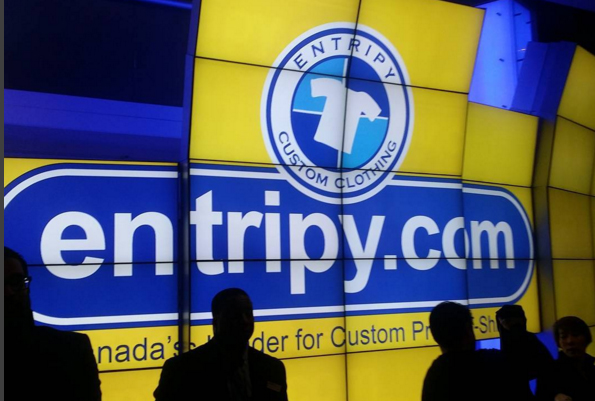 A Win For The Toronto Raptors On Entripy Game Night

Monday, January 18th was Entripy game night with the Toronto Raptors facing the Brooklyn Nets and fans were treated to an excellent game and unbeatable atmosphere. Entripy was proud to be court side as the MLSE’s official partner providing half-time entertainment, t-shirt toss and our unmistakable yellow digital signage.

As MLSE’s official partner, we were thrilled to host Entripy game night for the Toronto Raptors playing host to the Brooklyn Nets. The Air Canada Centre was packed and the atmosphere electric as the home favorites tipped off against New York underdogs. With clinical efficiency, DeRozan and Lowry ensured it was just another day on the court, and in the process secured a comprehensive 112-100 victory, putting behind them in 2nd in the Eastern Conference. Entripy was excited to be right there in the thick of it.

Welcoming Fans To The Game

We are immensely proud of the Toronto Raptors and we were overjoyed to welcome Raptors fans to the game. As you can see from the video, volunteers welcomed fans as they entered the building with complimentary custom t-shirts with the slogans, “Vote Demar DeRozan” and “Vote Kyle Lowry” on the front and “Let our backcourt hold down homecourt” on the back. With the great design and quality of the custom printed t-shirts, Raptors fans were keen to snap them up and support their favorite players.

Our custom t-shirts were part of a campaign to get DeRozan and Lowry onto the 2016 NBA All-Star team due to be held this weekend in Toronto. We made sure that as many people got a custom t-shirt as possible to help them win. 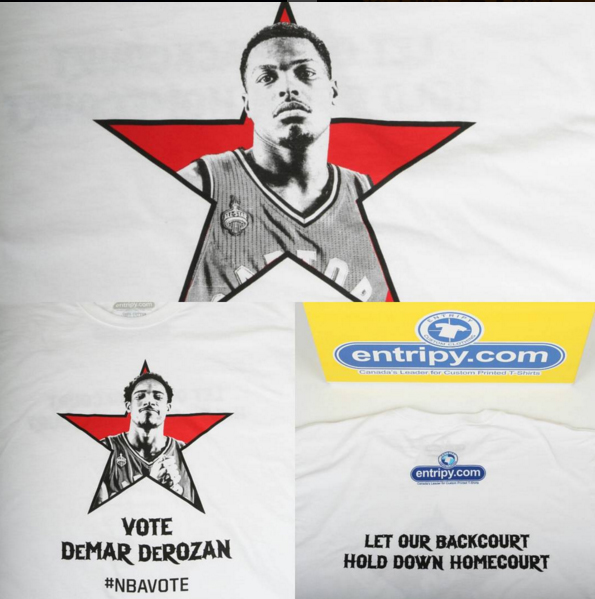 And it must have had some impact as Kyle Lowry will be starting for the Eastern Conference All-Star team with Demar DeRozan as reserve! It just goes to show that a little targeted marketing and a great campaign can achieve great results – which is what we do for all of our customers at Entripy. Well done guys, we look forward to seeing them represent Toronto from February 12th to the 14th.

Entripy entertained the crowd with a half-time game, with a cool $500 Entripy gift card up for grabs if the participant scored points shooting from different areas on the court. The lucky winner would be able to get fantastic Entripy custom clothing for their team, club or business. The Raptor mascot and the Raptor girls stormed onto the court shooting free Entripy custom t-shirts into the crowd adding to what was already an exciting night of basketball showcasing Toronto’s finest. Between the buzz created by Entripy, DeRozan’s steals and Lowry’s huge 3 pointers, the Air Canada Centre was alive!

Entripy and MLSE - A Natural Partnership

Entripy loves sports and helping teams like the Toronto Raptors, our local pro team Raptors 905, Toronto Marlies, Toronto FC and the Toronto Maple Leafs getting kitted out with the very best custom promotional products is what we do best. It is a natural partnership which is why it works so well – after all we at Entripy are from Toronto and love our city, which is why we are so proud to have our distinctive yellow signage at Entripy Game Night. Keep an eye out for upcoming sports events in Toronto because we aim to be right there cheering on our Toronto teams!