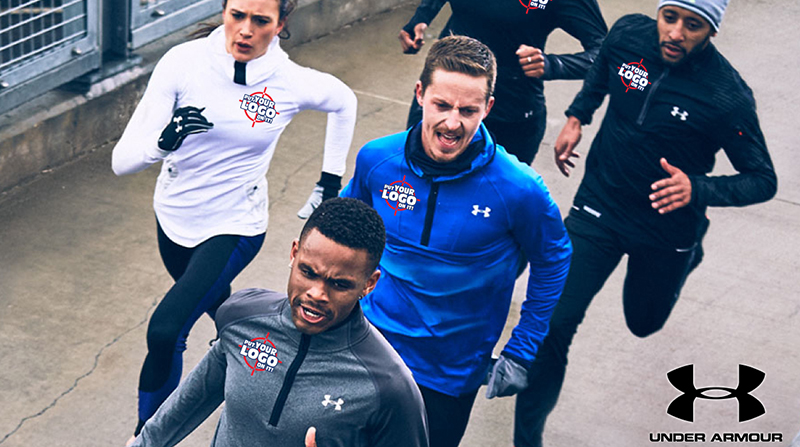 The apparel of choice for athletes around the world just got better. Entripy can now screen-print or embroider your logo on Under Armour custom t-shirts, polos, embroidered jackets and more.

A global leader in performance apparel, Under Armour outfits athletes with the most technologically advanced sportswear on the market today. Designed to give athletes that competitive edge to perform their best, Under Armour has changed the way athletes dress, and play.

A Short History of Under Armour

Under Armour was founded in 1996 by Kevin Plank, then a 23-year old captain of the University of Maryland football team. As a football player, Plank was tired of being uncomfortable in sweat-soaked cotton shirts. He noticed that compression shorts stayed dry during practice, and sought to use that same material to create a moisture wicking t-shirt, one that would move perspiration away from the skin, rather than absorbing it.

Under Armour had humble beginnings in Plank’s grandmother’s house in Washington, DC. Plank lived upstairs, had the sales office on the ground floor and kept inventory in the basement. Under Armour’s rise to success wasn’t without hurdles. Plank used his personal savings to start the company and was broke one year after starting the company.

Then, he made his first sale to Georgia Tech. Two dozen NFL teams followed suit and by the end of his second year in business, Plank had sold $100,000 in product. Under Armour’s sales are now in the Billions. In 2014, the company surpassed Adidas to become the second-largest sports apparel brand in the US (Nike is the first).

Changing the Way You Play

A global leader in performance apparel, Under Armour’s mission is to change the way athletes dress. Under Armour provides the most technologically advanced sportswear to give athletes that competitive edge to perform their best.

“Under Armour’s mission is to make athletes perform better and they do that through product innovation and a passion for sports,” says Entripy’s CEO, Jas Brar. “Entripy’s mission is to help teams perform better and we do that through using the most advanced techniques in the customizing industry to add team logos to their apparel items of choice.”

Entripy was recently granted permission to purchase blank t-shirts, polos, sweatshirts, jackets and more from Under Armour and decorate in house to sell to corporate clients, schools and sports teams. Customized Under Armour corporate apparel and Under Armour team wear is now available from Canada’s largest custom apparel decorator.

For Entripy, the decision to begin offering Under Armour custom apparel was simple. Our clients, whether they’re elite sports teams, high-performance training facilities, taekwondo studios or corporate golf teams, told us they were looking for name brand performance apparel. “Under Armour is hands down the best performance apparel in the world,” says Brar. “The decision was obvious. To help our clients perform their best, we needed to offer them the best.”

“We deal with a lot of clients, such as sports associations or even corporate clients, who want premium products and who are looking for that heightened brand recognition that Under Armour carries,” says Brar.

Under Armour is selective in the decorators they allow to customize their products, so Entripy being chosen by Under Armour to decorate their apparel demonstrates that we’re a business worthy of that brand. “And we’re the only ones in the industry with the flexibility to deliver it in 5 days,” says Brar.

Click here to view the Entripy’s full selection of Under Armour apparel.