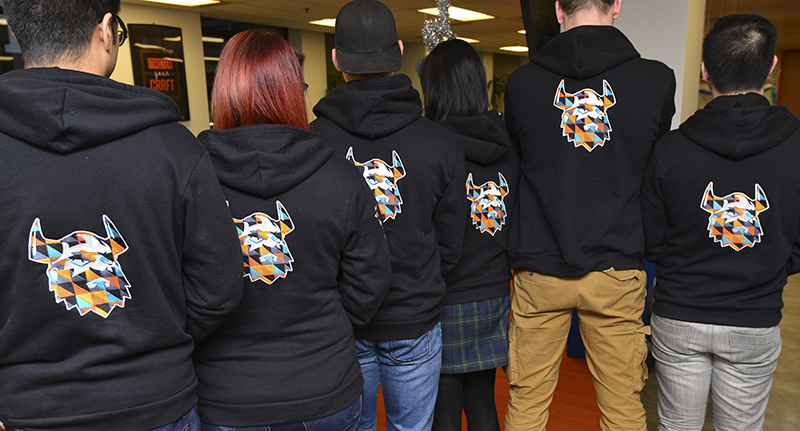 To celebrate their 5th anniversary, Big Viking Games, a mobile game studio with offices in London, ON and Toronto, wanted to create something special and memorable for their staff of 100.

The company had surprised staff with custom hoodies in the past, but as their fifth birthday approached, they wanted to get something truly special. The company held a design contest, inviting all employees to submit a design for their fifth anniversary hoodies and vote on the winner. “We not only wanted a design that stood out, but also one for which our Vikings felt some ownership,” says Nicholas Jones, Associate Marketing Manager, Big Viking Games.

The winning design focused on the Viking image. “Asides from being the most prominent part of our identity, it’s also just a really fun image, something that I feel communicates who we are,” says Keith, the designer who created the winning image. The winning Viking design used the full extent of the company’s brand colours, incorporating orange, blue, white and black, in a geometric pattern.

Entripy is a Stitch Above the Rest

Finding a company to produce their custom hoodies was the next step in Big Viking Games’ birthday planning. “Our CEO is very passionate about fashion, so he was adamant about using the most high-quality hoodies possible,” says Jones. Plus, the custom hoodies needed to be able to fit a diverse group of employees, “from petite artists all the way up to Viking-sized developers,” says Jones. While other venders weren’t able to meet Big Viking Games’ unique needs, Entripy stepped up. “Entripy went out of their way to provide what we needed – even sourcing a style of hoodie that they didn’t usually carry, with very limited lead time,” says Jones. “What’s more, this smooth service was still cheaper than the competitors we’d considered.”

Big Viking Games was set on embroidery as the decorating method, but with such a large and intricate design, they worried about how the final product would look. “I’m not sure I believed them when Entripy told us that it wouldn’t be a problem to embroider,” said Jones.

Entripy was happy to take on the challenge. “By always trying to fulfill our client’s needs and where that logo helps our own team experiences, it can be quite the win-win situation. We get more knowledge of what is possible with our machines and quality and the client gets an original, ground-breaking product from Entripy,” says Sonethasack.

The custom hoodies were presented to the Vikings at the company’s fifth birthday celebration and were one of the highlights of the night. “Everyone put them on immediately and kept them on, despite the fact that the party was already getting a little sweltering,” says Jones. Staff had seen photos of the hoodies and had been watching Entripy’s tweets and Instagram posts about the project. “Everyone was excited,” says Jones. “People were blown away by how good they looked in person,” he says.

The custom hoodies have become a staple item worn around the Big Viking Games office. “People are usually either wearing their hoodies at their desks or hanging from their chairs,” says Jones. The customized hoodies were so popular, some staff have even asked to purchase extras!