A History of the T-Shirt

Where It All Began

The t-shirt is arguably the most popular item of clothing and a staple in every closet, but this wasn’t always the case. The t-shirt’s rise to popularity didn’t happen until the mid-20th century, although it’s roots date much further back.

For years, the t-shirt was considered an undergarment for men. The first t-shirts were marketed in 1904 by the Cooper Underwear Company as “bachelor undershirts”, made for bachelors who didn’t know how to sew or replace buttons.

T-shirts first became part of the Canadian navy uniform in the early 20th century and were called jimshirts or skivvies, acting as sweat absorbers under their button down navy shirts. Although sailors would often remove their long-sleeve shirts and sport their t-shirts while they were working, the t-shirt was never considered something that would be worn on its own as a fashion item.

We can thank Hollywood for the t-shirt’s rise in popularity. In 1951, actor Marlon Brando wore a plain white t-shirt in the movie A Streetcar Named Desire. The t-shirt was officially elevated to “cool” status, much like bell bottom pants in the 60s. By the 1970s, the t-shirt was considered a fashion staple for both men and women.

The Rise of the Custom T-Shirt 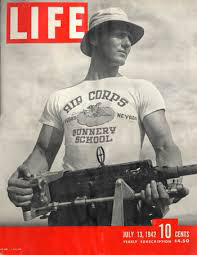 When plastisol ink for fabrics was patented in 1965, the blank canvas of the t-shirt was forever transformed. The first photo of words printed on a custom t-shirt appeared on the cover of Life Magazine in 1942. Rock bands were among the first to popularize screen printed t-shirts, showing t-shirts as means of self-expression and wearable art. Since then custom printed t-shirts have become a way for individuals and companies to spread their messages.

Even world fashion authority Glamour Magazine calls the t-shirt the “celebrity’s weapon of choice in order to make a statement without saying a word”.

One of the world’s most popular t-shirt campaign was Je Suis Charlie in 2015. In response to the attack on the Paris offices of the magazine Charlie Hebdo, millions of individuals took to wearing printed t-shirts reading “Je Suis Charlie” to demonstrate solidarity and support for freedom of speech.

Custom t-shirts became a popular marketing tool for companies. In 2009, Jason Sadler launched the site IWearYourShirt.com. He became a millionaire simply by wearing a different personalized t-shirts featuring a different company’s logo each day. Companies actually paid Sadler to wear their logos and share images of himself on social media, proving the t-shirt to be a powerful marketing tool.

Sanath Bandara won the Guinness World Records title for the most t-shirts worn at once. He outfitted himself in 257 tees.

The world’s most expensive t-shirt retailed for $400,000. What justified the high price tag is that this tee was studded with 16 diamonds. Eight of the diamonds were certified 1 carat white diamonds while the remainder were enhanced black diamonds.

The world’s largest T-shirt is approximately 305 feet long and 205 feet wide. It was unveiled in 2014 in Navegantes, Santa Catarina, Brazil.